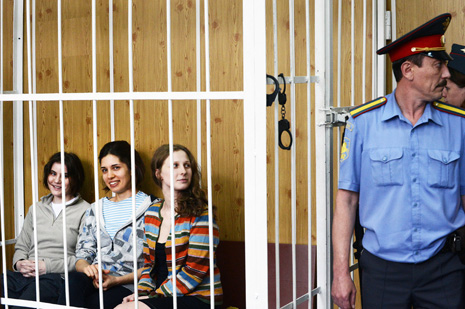 So Pussy Riot is in jail and the trial is a total farce. Madonna has spoken out on the subject along with a kazillion people from around the world. As someone who has been in feminist bands I am both saddened and outraged. When my band Le Tigre wore STOP BUSH dresses and spoke out against racism, homophobia and sexism we feared not getting a fair shake in both the music industry and the underground scene, but never jail. Karen Finley lost her NEA grant in the 90’s and my band Bikini Kill suffered jeers, violence and hate campaigns against us, but we never even thought about going to prison for our beliefs. The Guerilla Girls wear masks to protect their jobs and/or status in the artworld and also to have a leaderless group, but not to keep themselves out of jail.

Young girls write me all the time asking  “How do we revive Riot Grrrl” and finally I have an answer…What if people all over the world started their own performance groups, bands, art collectives, etc… and called them things like Pussy Riot Olympia. Pussy Riot, Athens Greece, Pussy Riot Paris, etc….And maybe if this trial turns out as the prosecutors want it to, with the women getting at least 3 years, we all play benefits and go to Russia en masse under the banner that we are all Pussy Riot, Yoko Ono could be in Pussy Riot, Patti Smith could be wearing a mask next to a troupe of girls from Tennesee storming the Cathedral of Christ the Savior screaming “We are all Pussy Riot!!!”

Who knows this could be the start of a whole new thing, a whole new motivating source for a globally connected unapologetic punk feminist art and music scene. A catalyst, no matter what it gets called. Anything is possible, if anything, this band has reminded us of that.